Ayurveda, as all of us know is the most ancient medical science which has been serving the mankind in terms of providing a comprehensive, natural and holistic cure for many diseases related to body and mind, apart from being the best in providing basic formulas for prevention of diseases.

It took a lot of effort on the part of ancient Ayurvedic scholars to have formulated, scripted, edited, written and developed this science without the availability of any modern day sophistication.

There are three main treatises which are considered most authentic and standard references for Ayurveda. These 3 treatises occupying the best positions for their authority and authentication with respect to compilation and presentation of Ayurveda in its best form are called as ‘Brihat Trayees’ or the ‘Elite three of Ayurveda’ or the ‘Greater Trio of Ayurveda’

These are known as ‘Brihat Trayis’ (Brihat Trayees), meaning 3 great treatises or ‘greatest trio’ of Ayurveda. 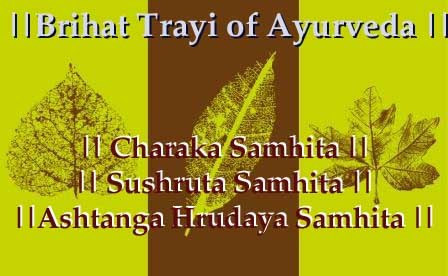 The Charaka Samhita is believed to have arisen around 400-200 BCE. It is felt to be one of the oldest and the most important ancient authoritative writings on Ayurveda. It is not known who this person was or, if indeed, this represents the work of a "school of thought." It could have been from a group of scholars or followers of a man known as Charaka or an original composition from a single person named Charaka. This work is sometimes considered a redaction of an older and more voluminous work, Agnivesha Samhita (46,000 verses), which is no longer extant. Dridhabala, living about 400 AD, is believed to have filled in many verses of missing text (perhaps up to 20%) in the Chikitsasthana and elsewhere, which disappeared over time.

The language of Charaka is Sanskrit and its style is poetry, with meter and melody. Poetry was known to serve as a memory aid. For example, Charaka contains over 8,400 metrical verses, which are often committed to memory, in toto, by modern medical students of Ayurveda.

It presents most of the theoretical edifice of Ayurveda and concentrates on the branch of Ayurveda called kayachikitsa (internal medicine). This is largely the theory of the internal fire--of digestion--or internal medicine, in modern terms. Charaka never discusses the sub-types of pitta and kapha, but does list and describe the 5 sub-types of vata.

Seen from a greater perspective, this work seems to represent a certain value of consciousness that is different from other works. It gives more discussion about the notion that life is fundamentally a field of intelligence and pure knowledge. This field is self-aware; it is the Knower as well as the object of perception, and for Charaka this is part of what is to be treated by the physician.

The Sushruta Samhita presents the field of Ayurvedic surgery (shalya). This branch of medicine arose in part from the exigencies of dealing with the effects of war. This work also is said to be a redaction of oral material passed down verbally from generation to generation. It is thought to have arisen about the same time period as the Charaka Samhita, slightly after or before it according to different authorities. Its style is both prose and poetry with poetry being the greater portion.

The Sushruta Samhita, while dealing with the practice and theory of surgery, is an important source of Ayurvedic aphorisms. For example, the most comprehensive and frequently quoted definition of health is from Sushruta. This work is unique in that it discusses blood in terms of the fourth doshic principle. This work is the first to enumerate and discuss the pitta sub-doshas and the marmas. With its emphasis on pitta, surgery, and blood, this work best represents the transformational value of life.

Ashtanga Sangraha and Ashtanga Hridayam are the work of a person named Vagbhata. There are two works by a person or persons with this name. The Ashtanga Sangraha is nearly 40% greater in size (by verse count) and is primarily poetry with prose. The Hridayam (about 7,800 verses) is written in prose and seems to have a slightly different organization of material than the former. Both works have been dated about the same time and are thought to date after the Charaka Samhita and Sushruta Samhita (400 CE).

The exposition is relatively straightforward and also deals primarily with kayachikitsa. In this work, we see the kapha sub-doshas are listed and described for the first time, completing our modern edifice of vata, pitta, and kapha with their five sub-types. Its emphasis on treating the physiology of the body and suggestions for therapeutic use of metals and minerals means the perspective of the treatise represents the gross, material value of life more than its counterparts Charaka and Sushruta. While Charaka has entire chapters dealing with the Self, these works merely mention that the body is the home for the Self without any elaboration.

It comprises of 3 treatises covering Ayurvedic Basics and description of diseases, formulations and treatments in a simplified way. They are basically the compilations taken from the ancient treatises especially the Greater Trio or Brihat Trayees namely Charaka Samhita, Sushruta Samhita and Vagbhata Samhita (Ashtanga Sangraha / Ashtanga Hridaya). Materials related to Ayurveda from the ancient treatises have been simplified and presented in a different way and chronology in Laghu Trayees but care has been taken not to compromise on the quality of content or meddle with core basics.

Laghu Trayees are said to be the next best to the Brihat Trayis among the elite references to study and practice Ayurveda in a comprehensive way. 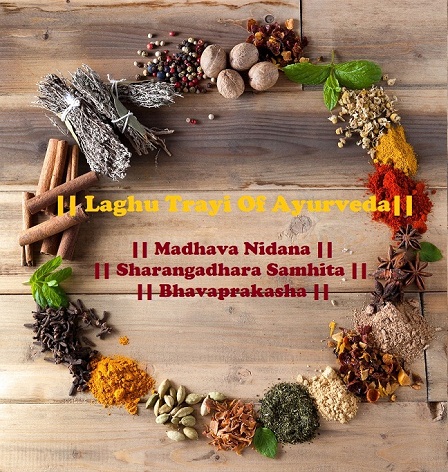 cological formulations used in panchakarma and contains the first textual elaboration of diagnosis by means of the pulse. Its subject matter is again the field of kayachikitsa.

Bhava Prakasha is the most recent of the classical texts, written in the 16th century. It is a well-organized and compact re-presentation of the earlier classics. There are about 10,268 verses of varying meters. It deals with kayachikitsa generally and has a large section entitled Nighantu, which gives the characteristics of many foods, plants, and minerals. Many of it sutras are direct quotes from earlier writers.

Madhava Nidanam deals with the classification of diseases in Ayurveda. Its taxonomy is slightly different at times from those given by Charaka, Sushruta, and Vagbhata, while for the greater part its verses are seemingly direct quotes from them. This work is dated around 700 AD and is prized for covering a wide range of diseases in the fields of bala (children and women's disorders), shalya, damstra (toxicology), shalakya (ear, nose and throat), and kayachikitsa. While this treatise gives detailed description of disease etiology (disease doctrines), prodroma and cardinal signs and symptoms, it does not give explanation or suggestions for chikitsa (treatment).